Barnsdales were thrilled to be declared the fourth most successful office disposal agent in Sheffield by the number of transactions completed after less than a year of opening our agency department in the City. In doing so Barnsdales have beaten many long established Sheffield agents as well as several large international property consultancies.

Tom Shelton MRICS who leads the agency presence for Barnsdales in Sheffield commented "we are delighted with how well the Barnsdales agency team have been received in Sheffield. We have worked hard to win new instructions in the City from old and from new clients and this is starting to gain momentum".

Barnsdales have had an office in Sheffield for just under 10 years, but only recently opened a dedicated agency function headed by Tom Shelton MRICS who has previously worked in the City as well as in London and Leeds as a commercial property agent. 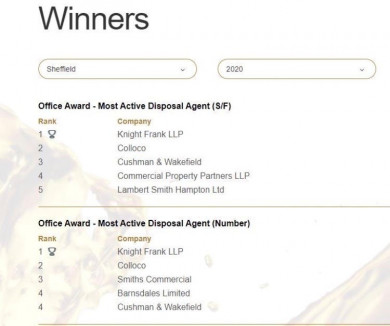